The Japan IP High Court has affirmed an earlier ruling by the Tokyo District Court, and sided with Ryohin Keikaku Co., Ltd, an operator of the MUJI retail chain, in a lawsuit accusing CAINZ Corporation, the second largest DIY store chain in Japan, of violating the Unfair Competition Prevention Act (UCPA) by distributing ready-to-assemble storage rack “Joint System Shelf” which is allegedly an imitation of MUJI’s “Unit Shelf”. 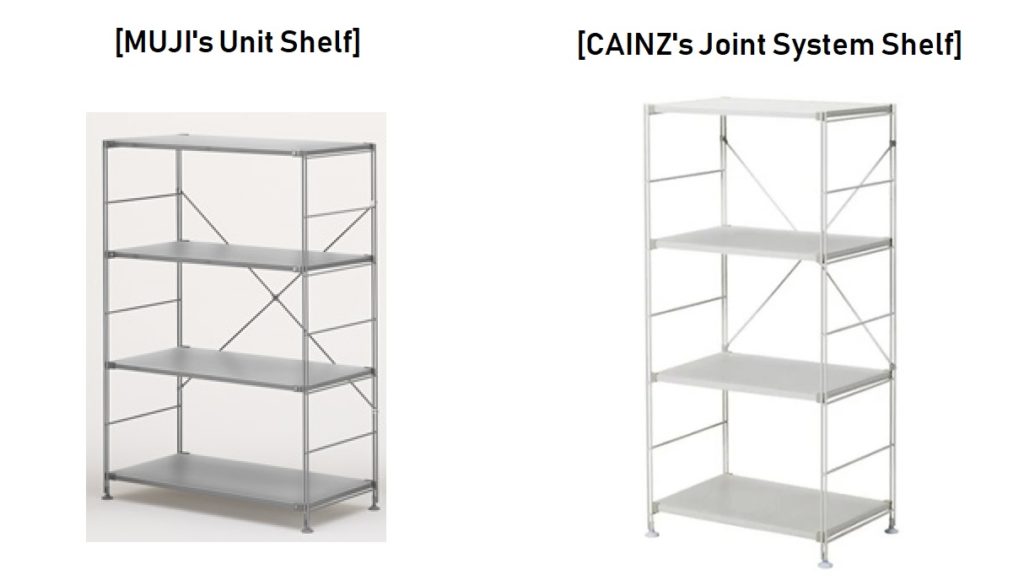 CAINZ (appellant) contested the early ruling made an error of judgment  in finding that relevant consumers conceive the shape of “Unit Shelf” as a source indicator of Ryohin Keikaku (appellee) based on the research results which showed approx. 98 percent of general consumers were unable to associate the shape with appellee, and 9 merchants out of 10 who daily deals with living ware and furniture could not identify the shape as “Unit Shelf”.

Besides, appellant claimed appellee violated clean hands doctrine and thus abused the right given he pursued the case knowing that his act to promote the “Unit Shelf” constitutes infringement of  design right belonging to a third party.

The IP High Court ruled the research was neither adequate nor persuasive  enough to negate distinctive function of “Unit Shelf” as a source indicator, stating that it just targeted people in their 20s to 40s despite consumers of goods in dispute cover whole generations having an interest in household furniture. The questionnaire to ask a specific name of retail shop was far from the case. Some of the researched merchants have business with appellant. In addition, opinions of 10 merchants are way too insufficient  to bolster appellant’s allegation.

Fact that an entity who suffered damage by unfair misconduct of competitor admittedly infringes design right belonging to third party  does not immediately hinder him from making a legal claim based on the UCPA. Being that appellant’s act to promote  the “Joint System Shelf” is likely to cause confusion with appellee’s “Unit Shelf”, the court finds  higher degree of necessity to put a restriction on appellant’s misconduct. From the foregoing findings, the court ruled in favor of appellee and dismissed the allegations as well as abuse of right.

When you conduct market research pertinent to trademark, you should be more careful to decide questionnaire and respondent. Non-existence of design or trademark registration does not guarantee risk-free transaction of a similarly shaped goods with hot-selling product if the shape functions as source indicator.