The Appeal Board of Japan Patent Office (JPO) disallowed registration of 3D shape of Mitsubishi Electric’s spiral escalator due to lack of inherent distinctiveness and secondary meaning in relation to escalators, class 7. [Appeal case no. 2017-6855] 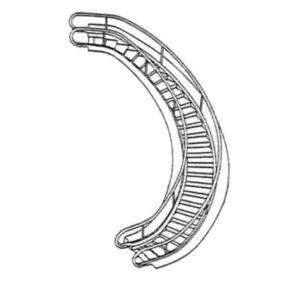 The JPO examiner totally refused the application based on Article 3(1)(iii) of the Japan Trademark Law stating that the applied mark can be easily seen as a 3D shape of escalator and the shape does solely consist of a common configuration to achieve the basic function of escalator. If so, the applied mark lacks distinctiveness as a source indicator.

To dispute the refusal, Mitsubishi Electric filed an appeal on May 12, 2017.

The Appeal Board, however, upheld the examiner’s decision on the ground and dismissed Mitsubishi’s allegation by stating that relevant consumers and traders shall conceive of an escalator designed to enhance its function or sensuousness at the sight of applied mark.

Mitsubishi Electric also argued that even if the applied mark is deemed descriptive in relation to escalators, it shall be registrable based on Article 3(2) due to acquired distinctiveness of the mark because Mitsubishi Electric Spiral Escalators has achieved 100 % market share in the world and continuously used the 3D shape on escalators for more than three decades.

Under the totality of the circumstances, the Appeal Board dismissed the allegation as well.

The Board found that regardless of 100 % market share in the category of spiral escalators, Mitsubishi Electric’s domestic supply record of 24 units in the last thirty years shall be a trivial quantity in comparison with total number of escalators in operation. Besides, questionnaire result rather shows a source of the applied mark is unknown to more than 60% of the questionee.

Based on the foregoing, the Board questioned whether applied mark has acquired distinctiveness through actual use in relation to escalators and consequently refused to register the mark based on Article 3(1)(iii) and 3(2) of the Trademark Law.